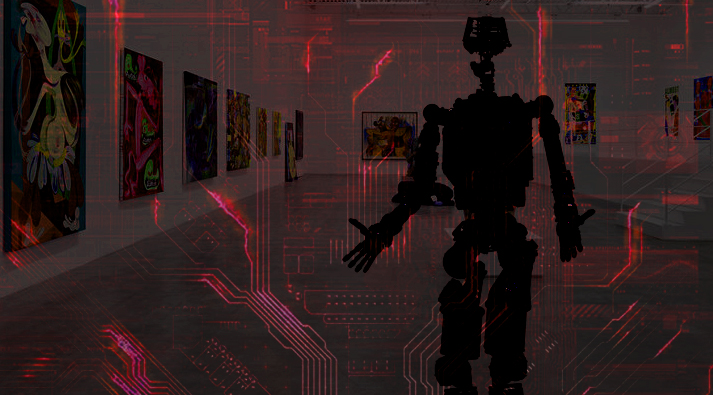 The NFT craze has seen some wild things so far, but this is one nobody saw coming.   If you haven’t caught up with the trend, all you need to know is that NFT stands for ‘non fungible token’ and is a cryptocurrency token that serves as a unique digital certificate of ownership that cannot be edited, duplicated, or preproduced without permission from the owner.

Putting an image, video, song inside of one of these is currently the best way to make sure an artist and their art are never separated.

Sure, whatever the media is can still be copied, but no one can copy the NFT file that goes along with it – they’d need to hack tens of thousands of computers at once (the entire Ethereum network) in order to get a fake to pass authentication. So think of it like an autographed copy, but the person who signed it is always with it, ready to say yours is the real deal.

The hype around NFT’s is currently in that phase where things get a bit ridiculous. Thankfully this story isn’t about another easily excited fool with money, throwing it away on things like ‘buying’ a tweet… which of course does not give the buyer any ownership or control over the actual post on Twitter.  Still, some sucker paid $2.9 million for a screen shot of the first tweet ever posted by CEO Jack Dorsey which reads ‘just setting up my twttr‘.

But maybe the buyer isn’t a total fool – experts speaking to the BBC agreed it’s a ‘highly valuable asset’ since it’s the ‘the first tweet, of the person who invented this’.

If you thought tweets selling for millions was something you’d never see, you probably didn’t see this coming either…

The World’s Most Famous Master Artists Return – As Artificial Intelligence…

Leonardo de Vinci, Salvador Dali, Van Gogh, Michelangelo, MC Escher, Pablo Picasso, Monet and more, they’re all back thanks to a team of researchers who embarked on a side project, where they go by the name ‘Robot Resurrection‘.

Their name really says it all, these long-dead artists are being resurrected… digitally.

The Scary Part Is: It Worked, So Well It Even Startled The Team…

There will be 10 images in their first series called ‘Masters Mashups’ which has one famous artist, paint a well known image of another famous artists. The first 2 are out now on NFT auction sites.

Robot Resurrection describes the process of creating their first piece:

“First we taught the AI everything about Salvador Dali’s style, having it conduct a deep study of every piece available.

It looks for things we as humans would never see, imagine examining every 1/100th of an inch of every painting. The color, then the color of the section to the left, right, above, below.  The brush movement that put those colors there, how forceful or gentle it was, how much paint was used, etc…

Then once we see the AI has more data on an artist than any human could ever gather – we tell it: BECOME HIM.

From that point on we’re in control of an intelligence that only knows 1 thing: how to paint like Leonardo De Vinci”

The first shows us what the Mona Lisa would look like if Salvador Dali painted it, instead of Leonardo de Vinci.

A Real NFT Use Case…

Honestly, putting one of these in your collection makes a lot more sense to me than buying a tweet, and it really is a great use case for NFTs.  It *has* to be done digitally.

Any other image can be printed on paper, or song recorded on tape – but when people hear a computer is making the art, people already expect to view it on a screen. It’s not weird that it’s a file.

You can view or bid on their work on Mintable’s NFT marketplace.