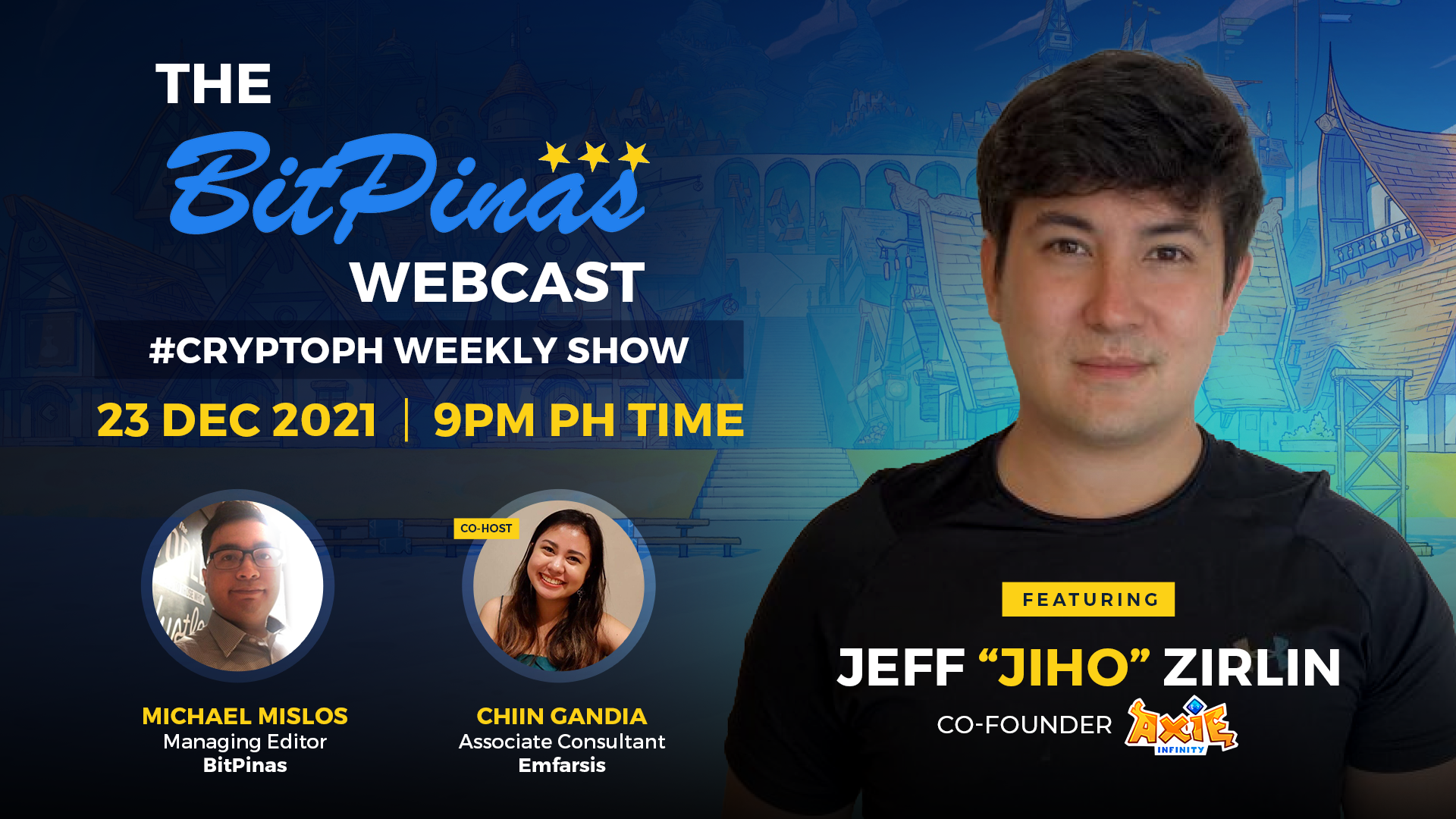 “It is really hard and we’re doing things that have never been done before. This is kind of all a big experiment, and there is no playbook. We’re building the playbook as we go and others are learning from us. And we’re learning from ourselves.”

This is the statement of Jeff Zirlin, also known as Jihoz, the co-founder and growth lead of Sky Mavis, developer of play-to-earn game Axie Infinity, as he was asked about the challenges of building a blockchain game during BitPinas’ Webcast 04 last December 23, 2021.

Stating that from 38,000 daily active users on April to 2.4 million daily active users on December this year, Chiin Gandia, the webcast’s co-host, asked Jihoz, “I don’t think a lot of people recognize that creating blockchain games would take a long time as compared to traditional games, wherein you can easily hire and there’s a lot of game developers, but blockchain game is such a niche industry and it’s just starting its year. So, what are the challenges that you guys have faced?”

Jihoz immediately answered the question by recognizing how hard it is to build an “incredibly fun” game, but also stated that building a blockchain game and all the infrastructure is potentially even harder.

“Because we’re actually the only people that have actually done it and put it all together. So yeah, we’re basically solving two incredibly hard problems at once. And that’s also what makes it really gratifying,” he added.

Moreover, Jihoz continued that Axie Infinity, aside from being a fun game, also has an “amazing” community and “amazing” infrastructure.

“And also, I think, it’s hard to compete with us because you need to make a really fun game and you need to also have an amazing community. And you also have to have amazing infrastructure. So, we’re the only ones that have been able to do that altogether, said Jihoz.

Directly answering the question, the Axie Infinity’s co-founder admitted that the challenges they are facing are hard for they are doing the things they never did before.

However, Jihoz emphasized that as they build the playbook as time passes by, others get to learn from them. But his team only learned from the playbook that they built themselves.

“We’re the ones that can actually learn from ourselves, the most because, a lot of people also, they don’t know what’s going on behind the scenes and a lot of those learnings,” he clarified.

Jihoz ended his answer by emphasizing that we are all here to do the hardest thing possible, trying to solve complex problems.

“It’s been an incredible challenge. But I think, we’re all people who want to do the hardest thing possible. And I think, that’s like, a lot of our personality is trying to solve incredibly complex problems,” Jihoz concluded.

This article is published on BItPinas: Axie Infinity’s Jeff Zirlin on Building a Fun Play-to-Earn Blockchain Game: There is No Playbook