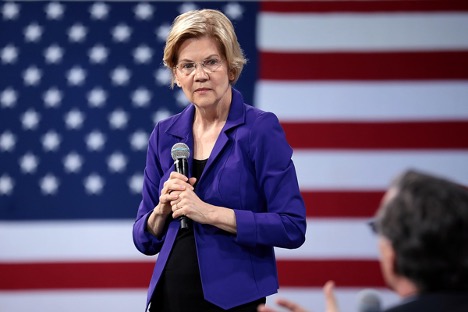 Watching your recent remarks to the Senate Banking Committee, your complaints about bitcoin come down to two arguments. First, that bitcoin is a “Wild West” – not unlike the early days of the American banking system – that should be regulated. Second, bitcoin consumes too much electricity.

Both these arguments – the Wild-Westiness of bitcoin, and its contribution to the climate crisis – are true. But I think you may be missing the forest for the (rapidly dwindling) trees. 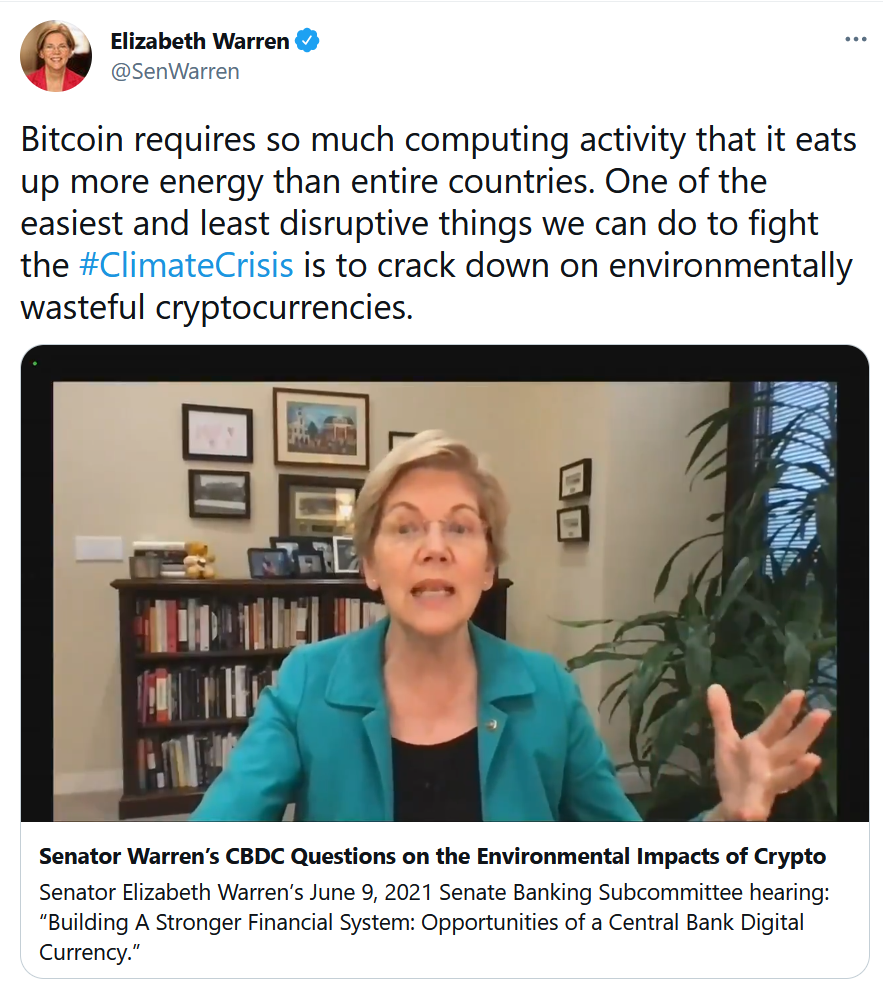 I have long admired how you fight for consumer protection and the middle class. Your book All Your Worth – co-written with your daughter — is one of the best money management books I’ve read, and I recommend it frequently. While many politicians pay lip service to helping the middle class, your books prove that you spend a great deal of energy giving people real tools to help themselves. 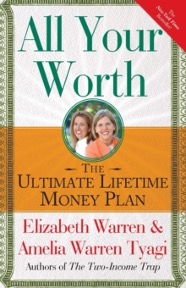 All Your Worth lays out the 50/30/20 budget rule, recommending that 50% of your after-tax income goes to “Needs,” or basic necessities like food and housing; 30% goes to “Wants,” which includes things like entertainment, vacations, and dining out; and 20% goes to savings and investments.

It is in this last 20% — savings and investments – that bitcoin can be a powerful tool for ordinary families.

You are correct that the world of bitcoin and cryptocurrencies is like the Wild West: it is no coincidence that we call members of the bitcoin network “miners,” since this time in history recalls the California Gold Rush of 1848, which changed the nation’s economy in ways both pedestrian and profound.

Still, there was gold in them thar hills, and that gold had real value. Similarly, bitcoin is like a digital gold: a non-correlated asset class that ordinary families can use to diversify their investments – that 20% of the monthly budget that you and your daughter recommend.

Our challenge is to educate investors on bitcoin’s volatility: you don’t want to put your kid’s college fund into crypto. But we do want some of our investments – maybe 2-10% of our overall investment portfolio – to enjoy the benefits of bitcoin.

Bitcoin, of course, is not the only game in town. It’s just one of a larger asset class that the kids call “cryptocurrencies,” and the grownups call “digital assets.” There are thousands of these digital assets, and they have helped many people achieve financial freedom by buying and holding them as quality investments.

It is hard to overstate how rapidly this space is moving. Like the early days of the Internet, innovation is happening at a furious pace, and it is here that the very nature of banking and money will likely look quite different within 10 years.

This is because users hold their own crypto assets, protected by code and kept safe with passwords. This reduces the need for banks – and with it, bank deposits. Of course, “bitcoin banks” will be needed, as many people don’t want to hold their own bitcoin any more than they want to keep their savings under a mattress. Currently, however, few U.S. banks can (or will) support bitcoin.

Think of all the changes that happened to the banking industry during the early days of the Internet, from online account access, to retail stock trading websites like E*TRADE. As radical a shift as that was, we were still dealing with U.S. dollars.

Now imagine the nature of money itself is changing, away from central banks and toward Internet-like digital currencies. On the leading edge of decentralized finance (or “DeFi,” as it is popularly called) are websites that allow users to make loans to each other and earn interest rates many times greater than banks can offer, peer-to-peer. No banks are needed.

Saying that we need to regulate bitcoin comes about five years too late. That horse has left the barn.

Instead, the U.S. should move quickly to create its own central bank digital currency (CBDC) that can offer the benefits of bitcoin with the backing of the U.S. dollar. (If you can’t beat ’em, join ’em.) Such an innovation would have a wealth of benefits for ordinary Americans, including reduced banking fees, faster payment and settlement, and a way to access the financial system for those who can’t afford banks.

It may seem that money is already virtual – most of our transactions are done using credit cards, debit cards, and digital payment systems like Apple Pay – but CBDCs make money programmable. Imagine U.S. dollars with an expiration date, encouraging consumers to spend when we need a short-term boost to the economy. Or U.S. dollars that can only be used for approved social programs (like food stamps than can only be used for food).

China, as you know, is leading the way with its own CBDC – its own programmable money – which it has been developing since 2014 (!). The digital yuan is already in beta, ahead of a planned rollout for the Beijing Winter Olympics in 2022. This is an almost insurmountable head start, and the U.S. is not even playing catch-up – we’re playing, forming committees to talk about playing catch-up.

There are already digital assets that are fully backed by U.S. dollars. These so-called “stablecoins” have seen incredible growth as users put in billions of traditional dollars and receive digital dollars in return, which gives them access to this new digital financial system.

The U.S. should partner with one of these leading stablecoin providers to create its own CBDC. This is both obvious and inevitable. Technology has a habit of disrupting even the most stubbornly entrenched industries: think taxi drivers vs. Uber, Main Street stores vs. Amazon, Wall Street vs. Robinhood, and so on. Why would money be any different?

Creating a CBDC from scratch is just too big, too complex for the U.S. to begin at this late date. Fortunately, there is precedent in the U.S. partnering with an independently-developed financial technology: the SWIFT network, which today shuttles about half of our cross-border payments worldwide. (SWIFT, incidentally, will also be disrupted by the ease of transferring digital assets, just as the U.S. postal service was disrupted by email.)

An energy-efficient CBDC also helps with the energy problem. Bitcoin simply belonged to the first generation of digital assets, so it’s inefficient. The newer digital assets – including a U.S. CBDC, as described above – are far more energy-efficient, as they’re built on fundamentally different architectures.

When investors buy and hold bitcoin, on the other hand, they are using only pennies of energy: another reason for helping investors think of bitcoin as a long-term investment. Set it and forget it. 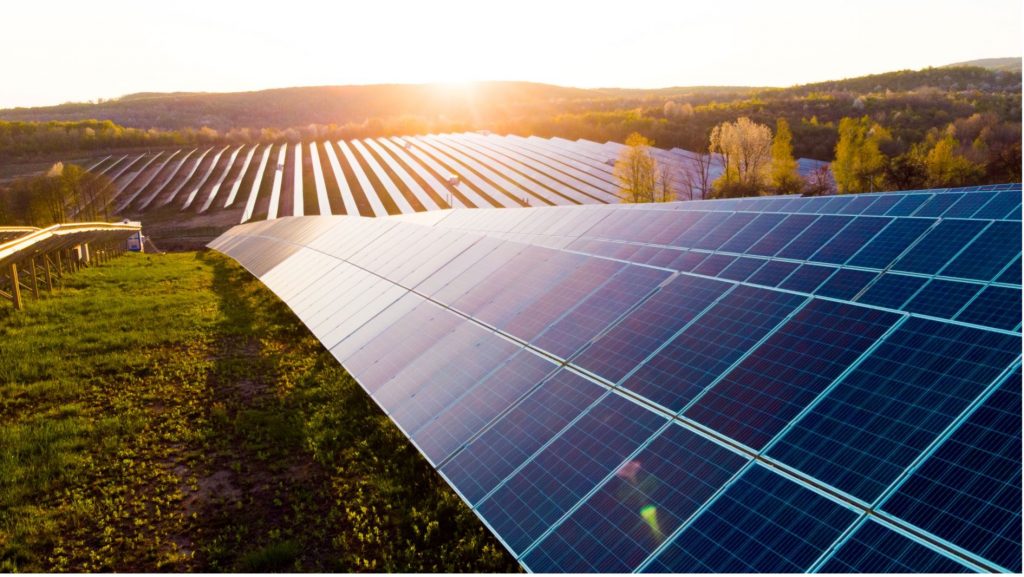 Incentivize bitcoin miners to use clean energy. There is a growing trend in bitcoin mining to use clean energy sources, like solar and wind power, to power the bitcoin network. The winds of change, so to speak, are already in the air. True, bitcoin’s ridiculous power consumption is a problem—but it’s also a once-in-a-generation opportunity to build out our clean power grids.

Offer tax credits or business loans — similar to the Obama-era incentives for, say, installing solar panels – to bitcoin miners that use clean energy. This will incentivize more bitcoin miners to move to the U.S., bringing with them technology, financial innovation, and jobs. (Plus, you can keep an eye on them.)

Senator Warren, we are at an inflection point.

Today, much of our financial, banking, and securities regulations are still dictated by the Securities Act of 1933, a law written during the height of the Great Depression. It, too, is badly in need of an overhaul.

At this time in history, when everyone can “mint their own money,” and 20-something college dropouts understand more about digital assets than seasoned bankers — the U.S. cannot afford to scratch its head in response, to “wait and see.”

Today there are two parallel economies: the traditional economy, and the emerging digital economy. (Because digital assets are based on blockchain technology, sometimes we call this the “stock market” and the “block market.”)

Sure, you could regulate bitcoin away – but to what end? You’d deprive ordinary Americans of one of the greatest investment opportunities of our generation. You’d allow China to take the lead in digital currencies, thus threatening the U.S. dollar as the world’s reserve currency. And you’d put U.S. banks at a competitive disadvantage, as all that digital money drained out of the American financial system.

First, we need to make it easier, not harder, for ordinary Americans to invest in this new “block market.” With this should come a great deal of investor education: digital assets are quite volatile, so diversify and hold for the long term.

Second, the U.S. needs to create its own CBDC, ASAP. Again, the easiest way to do this is to forge a public/private partnership with one of the leading stablecoins that are fully-backed by U.S. dollars.